The 18th-century mausoleum at Cobham Wood was intended to be the last resting place of the Darnley family, but the unconsecrated mausoleum designed by Wyatt became a 'folly' in Humphry Repton's designed landscape (photo: National Trust Images/John Miller)

The mausoleum at Cobham Wood, near Gravesend, dates from 1786. Built by the third Earl of Darnley after the family’s vault at Westminster was filled, it was intended to be used by his descendants – the owners of the Cobham Hall estate – but it was never consecrated and was left to fall into ruin. Rescued by a joint campaign in 2010, the mausoleum was fully restored and ownership was transferred to the National Trust. Now free to visit, the building features a huge stone pyramid and the classical style exterior is decorated with the symbols of death. Pause for a moment during a walk in Cobham Wood and you’ll feel as though you’ve discovered one of Kent’s secret treasures.

This really is one of Kent’s most magical spots. Set overlooking the sea between Herne Bay and Margate, Reculver Towers is a striking sight. The twin towers are the remains of a 12th-century monastic church. But even the church is fairly modern compared to the other ruins on the site. Look closer and you’ll find those of a Roman fort. It’s cared for by English Heritage but it wasn’t this close to the sea originally; sadly, much of the structure is being lost to coastal erosion.

All of our county’s museums hold surprises, but one you may not have heard about is the incredible Bronze Age boat housed at Dover Museum. One of only a handful of such vessels discovered in Britain, the boat was unearthed during excavation works for the A20 between Dover and Folkestone in 1992. It’s thought to be around 3,500 years old and because of its location it is widely believed to have been used at sea – making it the oldest seagoing boat to have ever been discovered in the world. Visitors to Dover Museum can see the preserved timbers, kept safe inside a glass case.

Dating back millions of years, the breathtaking sandstone rocks that form this natural feature are interlinked with a series of pretty bridges (photo: Manu Palomeque)

This natural feature was a big hit with the Georgians and Victorians, who loved to picnic in this spot near Tunbridge Wells. Dating back millions of years, these breathtaking sandstone rocks go on for acres, and are interlinked with a series of pretty bridges. Surrounded by woodland and rarely anything approaching busy, this is truly one of Kent’s secret treasures. Once a stone age camp, now a National Monument, the site is owned by The High Rocks pub and wedding venue – from where visitors can buy their tickets on open days, once these start again. 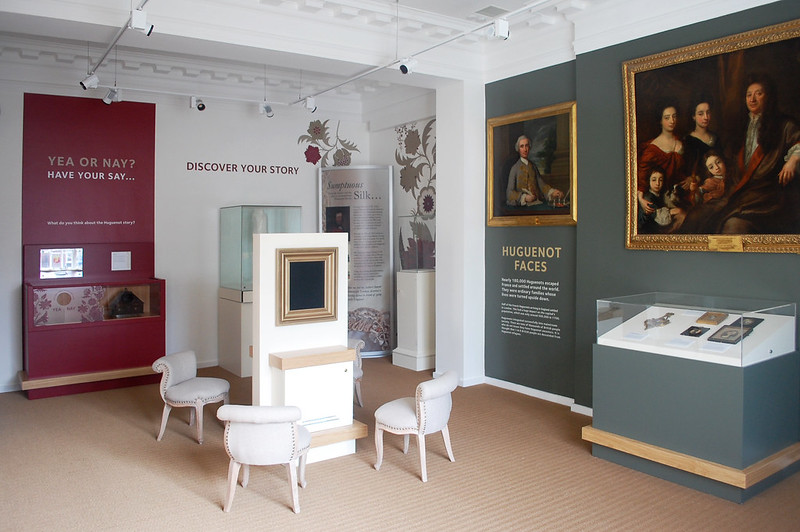 How much do you really know about Kent’s social history? This one-of-a-kind museum in Rochester tells the story of Britain’s first refugees; the crafts, trades and skills they brought with them and the impact their contribution had on the development of our country. The Huguenots were 16th and 17th-century French Protestants, persecuted in their native Catholic country and offered sanctuary by Elizabeth I. Between 60,000 and 80,000 came across the Channel and many settled in Kent. They were generally well thought-of and brought with them skills in finance, industry, medicine and crafts. This unique little museum is an important reminder that refugees add to our national identity.

Oare Gunpowder Works near Faversham, was once one of the main gunpowder factories in the south east (photo: Manu Palomeque)

Many of Kent’s parks offer up a secret or two but this one, near Faversham, was once one of the main gunpowder factories in the south east. A tranquil woodland, dotted with the ruins of the former industrial site, Oare Gunpowder Works Country Park is one of the only places you can enjoy a walk at the same time as learning about one of Kent’s forgotten industries. A nationally important archaeological site and designated a Scheduled Ancient Monument, it’s rumoured that Guy Fawkes himself bought gunpowder produced here. 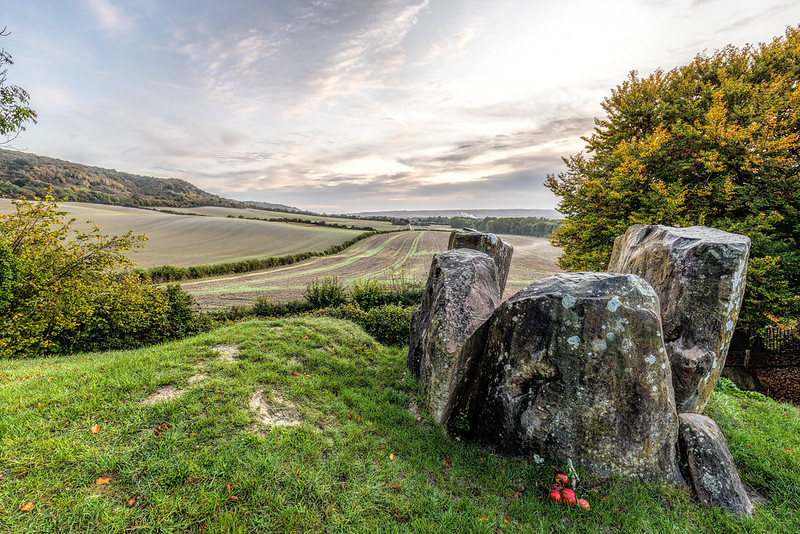 Going back even further in time, one of Kent’s least known but most important prehistoric sites is Coldrum Long Barrow in Trottiscliffe. One thousand years older than Stonehenge, this stone monument – with a burial chamber beneath – is the best surviving example of the ‘Medway monoliths’, which include Kit’s Coty House on Bluebell Hill. The magical thing about this site is that you can’t just stumble upon it. Hidden away down a long track, a small National Trust car park leads to a footpath with incredible views of the North Downs. Look out for a tree beside the Long Barrow that has been decorated with ribbons and offerings from visitors making wishes. 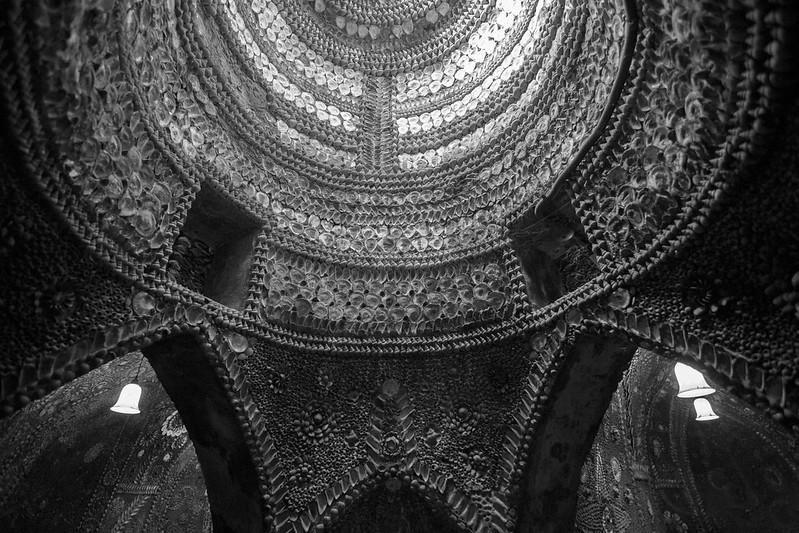 The mystery surrounding this hidden gem is half its appeal. Set in the seaside town of Margate, local legend says it was discovered in 1835 when the owner of the land tried to dig a duckpond. Nobody knew of its existence but the theory is that it was probably some sort of folly – possibly from the 1700s. The 200 sq ft of underground passageways and caverns are decorated floor to ceiling with millions of cockle, whelk, mussel and oyster shells in intricate patterns.

With more than 11 square miles of ancient woodland, Blean Woods is a National Nature Reserve and RSPB reserve. Thanks to its unique mixture of habitats, it’s home to woodpeckers, nightingales, dormice and rare butterflies. Part of the area, West Blean and Thornden Woods, is Kent Wildlife Trust land and it’s where you may spot some rare Konik ponies, brought in to help restore the woodland. It’s a magical place at any time of year with an impressive carpet of bluebells each spring.

One of Kent’s most extraordinary museums is part of Quex Park in Birchington. Originally the private collection of hunter and explorer, Percy Powell-Cotton, it comprises eight galleries of his treasures. Powell-Cotton was a pioneer of the diorama to display mounted animals and their natural habitat, and the galleries of natural history are some of the most unique and fascinating in the country. It’s a visual treat unlike any other in Kent.

There are so many fabulous parks and gardens to choose from, but the combined site of Russell Gardens and Kearsney Abbey (known as Kearsney Parks) is one of the county’s most interesting. Set just outside Dover, in the beautiful Alkham Valley, the origins of the neighbouring parks can be traced back to grand country houses built by local industrialists in the 19th and 20th centuries. Both of national importance, Russell Gardens features steep terrain with terraces, pergolas and a long canal pond, while the less formal Kearsney Abbey offers open parkland and lakes.

One of several Roman sites across Kent, this roman villa is unique because it was a family home. Discovered in 1939, the villa dates back to around 100 AD and is thought to have been something to do with Publius Helvius Pertinax – governor of Britain and briefly emperor. Among the remains visible behind protective glass are part of a mausoleum, a dining room and a chapel with early Christian symbols. Apparently abandoned after a fire in the fifth century, the villa offers a fascinating glimpse into real Roman life in Kent.

The season of romance is in the air and with fairytale castles, literary tales and iconic White Cliffs, where better to pop the question than in the Garden of England? Here are 10 of Kent’s perfect places to propose

Enjoy these five romantic walking spots in Kent, together they span our glorious county at its finest

Explore the beautiful county of Kent, the Garden of England, with this virtual day out in the county