Folkestone's Creative Quarter is home to a diverse collection of independent boutiques, cafés, restaurants, artists' studios and creative businesses. A lively community based around Tontine Street and the Old High Street, it was developed by the Creative Foundation - a charity launched in 2002 to regenerate Folkestone through creativity - and is a unique attraction for visitors.

The Leas promenade is home to hotels, mansions, colourful flower beds, the Leas Cliff Hall events venue and Bandstand. Sadly, the much-loved Leas Lift Funicular Railway was still closed for repairs at the time of writing. Beneath is the Lower Leas Coastal Park, with its pine avenues, grass amphitheatre, pretty gardens, and the south east's largest free adventure playground. 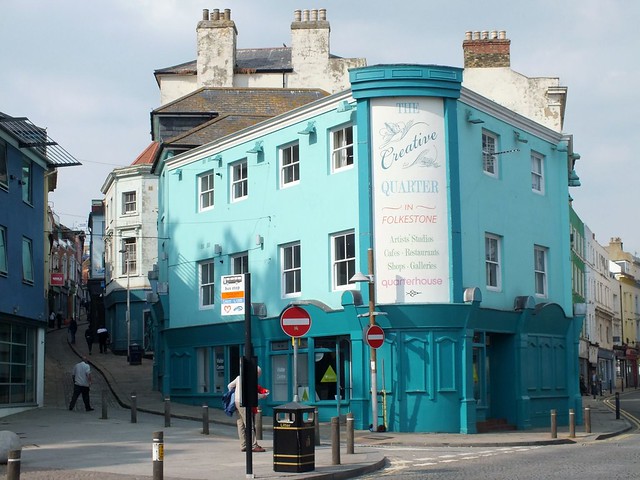 Folkestone's stunning coastline, between Dover and Dungeness, has views as far as France on a clear day and is home to our end of the Channel Tunnel. For a great seaside walk, start at the Folkestone Mermaid statue on the rocks overlooking Sunny Sands and head past the harbour. Walk along the beach, past the beach huts, to the pretty neighbouring town of Sandgate, returning via the Lower Leas Coastal Path. Or head the other way out of Folkestone towards The Warren for views of the White Cliffs.

Signs of regeneration are everywhere, particularly at the harbour arm and the former pier railway station that sat disused for years. Refurbished and opened to the public in 2014, the harbour arm is now a visitor attraction and home to live music and film screening events in the summer. Look out for the Lighthouse Champagne Bar, Docker Brewery & Bakehouse and That Burger. The station has been restored too and its history as an embarkation point for millions of soldiers during the First World War has been imaginatively preserved.

The old Harbour railway station has been renovated to complete a network of footpaths and walkways in and around Folkestone Harbour and seafront (photo: Manu Palomeque)

5. Eat out and about

Dozens of new independent eateries have opened up over the last few years, including El Cortador, Annapurna, Earls at Wards Hotel, Aspendos, Conchitas, Luben, The Cliffe at The View Hotel and Rocksalt, which overlooks the water at the harbour. Look out for Shayda's Turkish restaurant, Marco Pierre White's Steakhouse & Grill at The Clifton Hotel and Sotirio's bar and restaurant. There are dozens of good cafés too, including the book-lined Steep Street Coffee House, Anna's tea room, The Hideaway and the vegetarian Beano's. Don't miss traditional afternoon tea at The Grand - the iconic hotel on The Leas.

A steep climb indeed, but the Old High Street is a treasure trove of independents shops and eateries (photo: Manu Palomeque)

The Creative Quarter is home to the Quarterhouse, a contemporary performance venue with a programme of theatre, dance, music, film, comedy and family shows. It holds festivals and community events throughout the year and now has a new café bar, The Clearing. Leas Cliff Hall offers seating space in its Grand Hall for 900 and has hosted some of the world's biggest bands. Other cultural delights include several art galleries, Silver Screen Cinema and contemporary outdoor art exhibition, Folkestone Artworks. The latest addition, The Ledge, by Bill Woodrow brings the current exhibition up to 74 pieces.

The Warren is a sandy beach, rocky in places, and surrounded by chalky cliffs and the East Cliff and Warren Country Park. Part of the Dover-Folkestone Heritage Coast and the Kent Downs AONB, it's hard to believe that this wild and rugged landscape was once a popular beauty spot, with ornamental gardens, children's rides and its own train station. Now walkers explore the coastal footpaths and nature lovers seek out its resident insects and plants.

So close to mainland Europe, it's no surprise that Folkestone played an important part in both World Wars. The First World War Memorial Arch, unveiled by Prince Harry in 2014, stands at the top of the hill leading down to the harbour, where countless men boarded boats headed for the Western Front. The Second World War is remembered thanks to the planes, hangers and artefacts of the Kent Battle of Britain Museum in nearby Hawkinge and again at the Battle of Britain Memorial in Capel-le-Ferne, famed its propeller-shaped layout and its new award-winning visitor centre, The Wing.

A few dates for the diary in this bustling town are: Armed Forces Day (30 June) held on The Leas and featuring an air display by the Red Arrows, SALT Festival of the Sea and Environment (6-9 September), Folkestone Book Festival (15-24 November), while a new vintage festival and music day will be held at the Leas Bandstand this year on 13 July. The Folkestone Triennial event is set to return next year.